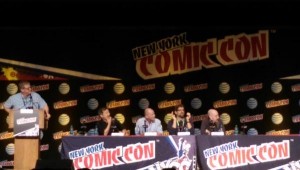 The panel walked out, sans Miller, to applause and introductions; but it was the announcement everyone was waiting for when moderator John Cunningham announced: “Mr. Dark Knight himself, Frank Miller!”

The icon walked on stage to a sustained standing ovation, and did not disappoint the gathered fans. Miller fielded many questions, from the moderator, the rest of the panel and the crowd, handling them all with the grace of a professional, and the underlying playful gruffness only the writer of the darkest Knight tale could exude.

One of the most important questions regarded sharing the Dark Knight Universe with Azzarello, and Miller set minds at ease, explaining: “DC let me play with their toys, then Brian asked me if he could play with DC’s toys the way I had treated them. No egos were bruised; no feet were stepped on.”

Inevitably, the topic of 2016’s Batman vs. Superman: Dawn of Justice came up, and Miller was asked what he hoped to see included in the film from his books.

“The most important [scene] I would want to have is the duel between [Batman and Superman]. With the clear point that Batman wins.”

Unsurprisingly, the auditorium erupted in cheers.

For more from The Dark Knight 30th Anniversary panel, keep checking our DK30th tag. Don’t worry, there was a lot of ground covered and we’ll be sure to share it all with you here on Geek Prime!