The screening of the first new X-Files episode in was met with crazy applause at EVERY moment. From the beginning of David Duchovny’s voice-over, through the iconic (and slightly unchanged) opening credits, straight through to the “I made this!” Ten Thirteen Productions tag. It was a hit. 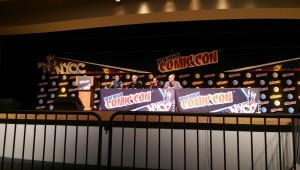 One significant change is the addition of Mitch Pileggi (Assistant Director Walter Skinner) to the opening credits. Panel moderator Kumail Nanjiani and the panelists watched the episode and the crowd from backstage, and when the audience erupted in applause and cheers at the gruff father-figure’s billing in the opening credits, Nanjiani looked over at Pileggi and saw the veteran actor mouth one word: “Wow.”

On the panel with Pileggi were David Duchovny (Fox Mulder) and series creator Chris Carter. Gillian Anderson (Dana Scully) wasn’t able to attend, but greeted fans before the screening in a video message, complete with a contrived English accent.

Because of the screening, the panel only lasted for half an hour, but the guests made the most of it. Duchovny and Pileggi bantered about the Mulder/Skinner relationship, and Pileggi talked about the genesis of his stern but protective character. 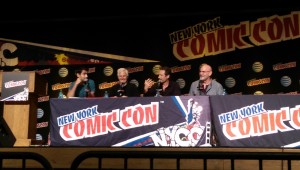 Pileggi’s father worked for the DoD in the Middle East, and much of Skinner’s demeanor is based on the elder Pileggi. As he talked about the first time his family saw him performing as Walter Skinner, Pileggi got visibly emotional saying: “and they told me, that’s Dad.”

We almost didn’t get to experience the iconic frenemy-boss, since Pileggi auditioned for Carter twice, being passed over both times before being given the initially recurring, then regular role. It’s hard to imagine The X-Files without Skinner, almost like trying to watch Stargate without General Hammond, or Star Trek: Deep Space Nine without Odo. Unthinkable.

Carter noted that the current environment of government surveillance, climate change and uncertainty about the future is “the perfect time to tell more X-Files stories.” Duchovny put Carter on the spot near the end, when the question of a season eleven and beyond came up. When Duchovny mentioned “an appetite for more,” which was met with a “hell yeah.” Carter was coy about the future beyond the limited series, but fans can be content knowing the truth is coming to their TV sets (or phones, or tablets, etc) in January.

As for the current revival’s structure, the middle four episodes will be standalones, bookended by mythology.

Before they left, Nanjiani got the fellas to take a selfie with him, framing the audience in the background. 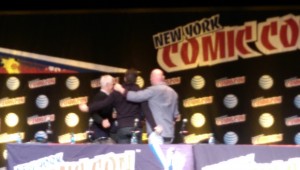