Paramount has just released the first Official Poster for the new Star Trek Movie “Star Trek Into Darkness” set for release 05/17/13. ( FULL POSTER BELOW) Also check out the official Plot below and also some information we dug up about who the villain will be.

When the crew of the Enterprise is called back home, they find an unstoppable force of terror from within their own organization has detonated the fleet and everything it stands for, leaving our world in a state of crisis.

With a personal score to settle, Captain Kirk leads a manhunt to a war-zone world to capture a one man weapon of mass destruction.

As our heroes are propelled into an epic chess game of life and death, love will be challenged, friendships will be torn apart, and sacrifices must be made for the only family Kirk has left: his crew.

There have been alot of rumors concerning the Next Star Treks Villain and Main plot. But with the help of our friends over at  The Man Cave Daily and their contacts at Paramount we believe the next villain wont be KHAN! But a Important yet overlooked villain from the Original Star Trek Pilot. During a recent interview Karl Urban Was asked about Benedict Cumberbatch and adding him to the cast of Star Trek Into Darkness and Urban had this to say:

“He’s awesome, he’s a great addition, and I think his Gary Mitchell is going to be exemplary.”

So who is Gary Mitchell?  A potentially great choice for the villain.  If you don’t consider “The Cage” to be the first episode of Star Trek: The Original Series, then Gary Mitchell is the series’ first antagonist.  The character appeared in the series’ premiere episode, “Where No Man Has Gone Before” and was played by Gary Lockwood.  Mitchell attended Starfleet Academy with Kirk, and the two went on a mission to a planet where Mitchell was hit by a galactic barrier that gave him the following abilities [hat tip to Memory Alpha]: 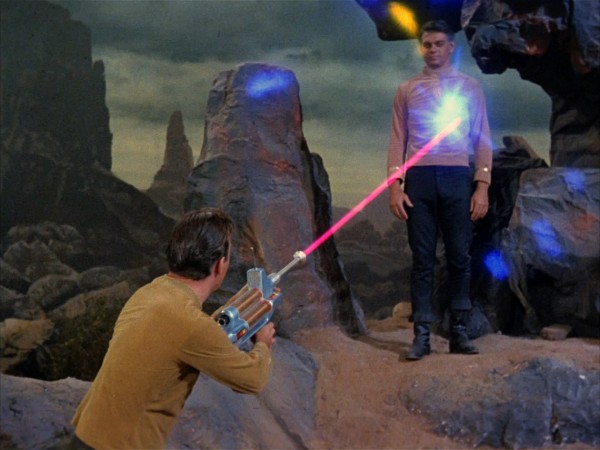 Mitchell became violent and dangerous, and Kirk attempted to strand Mitchell on Delta Vega.  The two fought, and Kirk killed Mitchell by knocking him into a grave that Mitchell had ironically prepared for his captain, and Kirk used a phaser to make a bunch of rocks fall on top of Mitchell.  It doesn’t make a lot of sense when the guy had the power of telekinesis, but whatever.

Now if we take a line from the offical Plot, “With a personal score to settle, Captain Kirk leads a manhunt to a war-zone world to capture a one man weapon of mass destruction.” We think that we can say for a fact Gary Mitchell is the Main Villain in Star Trek Into Darkness.

Also check out these pretty cool set images of what seems to be a scene where Spock (Zachary Quinto) is fighting hand to hand with Gary Mitchell (Benedict Cumberbatch). And from what we can tell it seems like he is trying to use the Vulcan nerve pinch on him and if the Villain is Gary Mitchell rendering him powerless by being unconscious would make sense and be the only way to stop him.