Supergirl S01E11 “A Strange Visitor from Another World” Recap [SPOILERS]

As we get into the meat of the back end of Supergirl’s first season, the other superhero (and oft-Justice League member) got some more development and back story.

Warning: if you haven’t yet seen Supergirl season 1, episode 11 “Strange Visitor From Another Planet,” stop reading if you don’t want spoilers. (But head back over once you’ve seen it!) 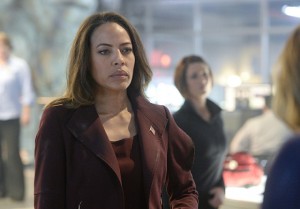 My face when I ignore spoiler warnings.

In a continuing payoff from Hank Henshaw’s big reveal as The Martian Manhunter, this week’s villain was from the Red Planet. An anti-alien senator (initially reminiscent of a re-modeled Lex Luthor) is attacked by a White Martian. Henshaw reveals it’s a gambit to bring J’onn J’onzz out of hiding.

The episode goes over J’onzz’ history on Mars with the White Martians and their genocide of the Green Martians, noting on the side that J’onzz is over 300 years old. After figuring out the Martian is posing as the senator and will only return a captured Alex in exchange for Martian Manhunter’s life, Henshaw weighs his options and decides to die. After being saved at the last minute by Supergirl, he figures the world is better off with one less Martian, and prepares to kill the White before being talked down.

The B-story for once didn’t involve Winn, Jimmy or a combination of the two. In fact, both were conspicuously absent from the episode, owing to last week’s profession of love from the well-coiffed techie and the Olsen’s quick photo-derived plot point.

Instead, it revolved around the mysterious “Adam Foster,” Cat Grant’s son that she admits she’s had no contact with for at least two decades. We find out one of the letters Cat had written in (or possibly between) previous episodes was finished and sent by Kara. 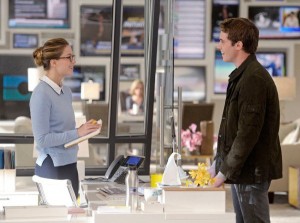 “Does it matter than I’m married?”

After some perfunctory awkwardness and anger between Cat and her son, the young man shows more than a little interest in the Lass of Steel (interestingly played by Melissa Benoist’s real-life husband). With Winn still pining for her, and the original DC Comics “Adam Grant” being a young child killed by Toyman (Winn’s father), could we see our first turn to villainy for a series regular coming in Season 2? 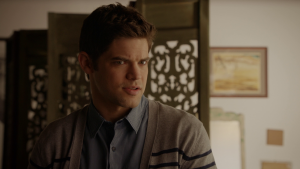 “So I have to grow a goatee now…right?”

As a side note: finally, Cat Grant’s pronunciation of Kara as “Kira” is addressed, if only to be dismissed. But there’s one thing that’s been annoying us all season put to bed.

What do you think? Is Adam’s arrival a good thing, or can it only lead to bad, bad stuff for Supergirl?

Supergirl S01E11 “A Strange Visitor from Another World” Recap [SPOILERS]