Surprises in Store for Part 2 of Teen Wolf: Season 5! 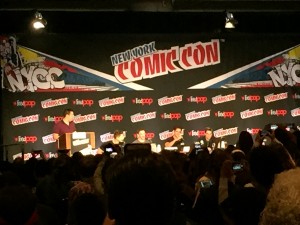 If the trailer is any indication, fans are in for a wild ride in Season 5B of MTV’s hit series Teen Wolf.

Showrunner Jeff Davis joined cast members Tyler Posey, Dylan Sprayberry, Cody Christian, and surprise guest JR Broune at New York Comic Con on Friday to preview the Season 5B trailer and discuss what’s in store for the wolfpack in what’s shaping up to be the show’s darkest season yet.

You can watch the whole panel here, but we put together a handy cheat sheet of everything you need to know before the new season hits the small screen:

Stay tuned for a transcript of our roundtable interviews, and more Teen Wolf teasers than you can howl at.

Surprises in Store for Part 2 of Teen Wolf: Season 5!